Leading to a safer and more peaceful world

One of the things that will be essential to i-PRO’s true “independence” is to have its own data system. To develop this over a limited period of time has been a Herculean task. Ayako Shiga, at the Business Process Technology Center (BPT), has been spearheading the work. She has been under unimaginable pressure, but also seems to be enjoying herself. Let’s ask Shiga about the ideal form of IT she hopes to realize at i-PRO.

New Challenges That Crop Up on the Job

Q. You majored in engineering at university. What was it that inspired you to choose that path?

In my childhood I loved science fiction novels, reading works by such authors as Isaac Asimov and E.E. Smith. My choosing to go into physical science was completely due to that influence. I was fascinated by space, to the extent that the graduation paper I wrote in high school was titled, “I Want to Become an Astronaut”! (Laughs)

Q. Following your graduation from university, after working for a foreign-affiliated IT company, you moved to i-PRO in April 2020. How is the environment there now?

For me, it was my first time to change jobs, so I was somewhat nervous; but this is an extremely good company in terms of both people and atmosphere. As a new company, a variety of new challenges have popped up. I really enjoy being a part of this company. 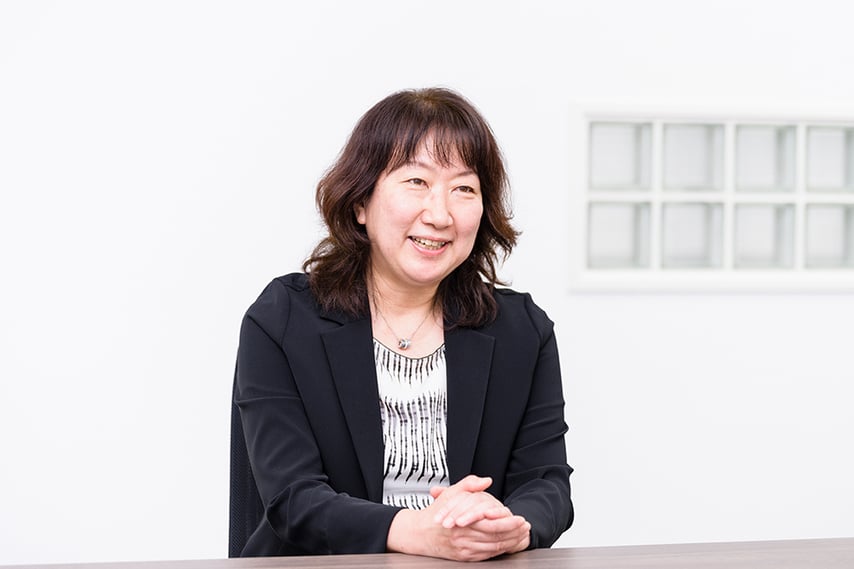 Q. Please tell us what role you play at BPT as the general manager.

First, we are working to deploy IT systems as a work process while making them independent of Panasonic Systems. We have to succeed in doing this without halting business, and without inconveniencing customers.

After doing this, our ultimate objective will be for i-PRO to contribute to the change required in becoming a digital company. We want to contribute from four perspectives:

What I mean here by digital company is a company that provides customers with high value through the harnessing of data and digital technology.


Q. Making IT systems independent sounds like a large-scale project.

Yes. That’s because it covers all systems other than those owned by the company. BPT doesn’t have that many members, but numerous company staff apart from BPT are taking part in projects, and we’re up to partnering with eight companies. Everyone at Panasonic, from which we’ve become independent, has given us personal support. Panasonic systems, as far as i-PRO is concerned, are big and complicated, but as they’ve been continually improving over a long period, they are easy to use and can adjust to the “pain” of migrating to a new system. However, to assemble data scattered at the respective global hubs in Japan, China, the U.S., Europe and other locations, unless we as a new company can conduct the migration as part of a unified process, we won’t be able to support i-PRO’s future growth. There are all kinds of difficulties, but this also gives us the opportunity to move forward at once.

Q. But these problems are different from those faced by the hubs and departments, aren’t they?

That’s right. Because multiple systems in multiple offices are going to merge, over the short term, we’ll apply the “Fit To Standard” method. This deploys global best practices. The standard processes and functions of the packages will be matched to i-PRO’s business to the greatest degree possible, but for example as the countries where they do business are different, there will be cases where individualized responses will be required. While it will be difficult to determine what is necessary, there are also cases when top management sends us messages, and members of the project team also understand the “Fit To Standard” method and cooperate with us.

There’s no problem systematizing incrementally, but for many systems we deal with, we have to migrate over a brief period. And because there are numerous external connections, it’s necessary to conduct all of the changes in one swoop, like the Big Bang. That is the difficult part.

Each i-PRO member becomes stronger through the power of digital

Q. What phase will BPT go to after making the safe transition to a new system?

After we have established the basics, next we’ll move forward. Presently at i-PRO, the entire company is working on “time equals speed” reform. The proposition concerns how to shorten the duration by which new products are launched, or speeding up the delivery of things customers desire. In this way, we would like to actively contribute to the front side of the business that provides value to our customers. Also, in the IT sector, it is popular to call this DX (digital transformation). I think one important aspect of DX is that, by mastering the utilization of data and digital technology, the ability of each and every employee can be bolstered. I think it will be really interesting to see a world where each person’s ideas can be realized with a sense of speed.

Q. How are things from the perspective of business reform?

With the human resources center taking the lead, we have begun to introduce a new Objective Management System: OKR (Objectives and Key Results). This is a system that Intel and Google used to produce results, and it will be an effective arrangement by which to change the company’s culture. We at BPT have also set this as one of our objectives to be achieved two years from now, in which we have proposed “a BPT that will offer many suggestions for business reforms and business improvements, along with joint suggestions.” This is the ideal as an IT department, but at the same time in reality it’s also difficult. Because of the timing to renew nearly all the systems, I’m sure we can do it. First we set our objectives, and then we got together for this important situation. Now, with my colleagues we’re going to go all out. This is going to make my head spin! (Laughs)

Q. Finally, please tell us which kind of people you want to work with.

The kind of people I want to work with transcend organizations and positions, and make proposals out of self-conviction. i-PRO is in the process of changing itself with tremendous momentum. I want to enjoy being a part of this change and of this growth. And with world-class technology, I want to work together, with excitement, to provide the world with security and safety. 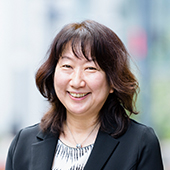 Following graduation from the Faculty of Engineering at Nagoya University, Shiga joined a foreign-affiliated IT company, where she worked as a systems engineer, project manager and in customer service. She provided services for numerous clients in such fields as systems integration and outsourcing. After working in marketing and other positions, she joined Panasonic i-PRO Sensing Solutions in April 2020. Presently she is Chief Information Officer and leading the team of Business Process Technology Center. 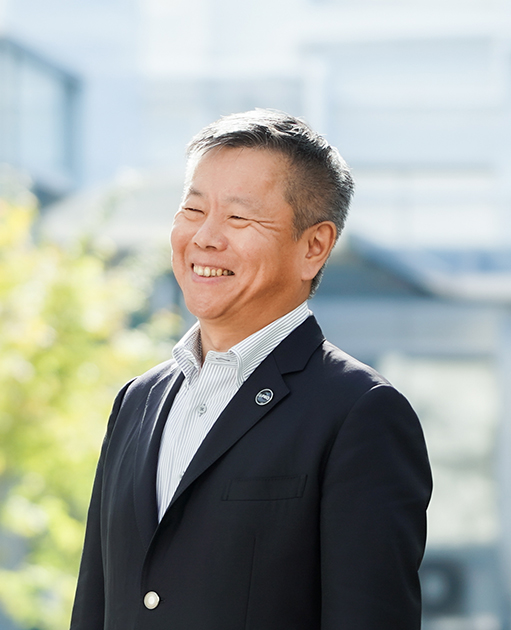 Getting The Edge: Leveraging Edge AI To Give i-PRO A Global Lead

Masami Eguchi heads i-PRO’s security and safety business outside Japan and the United States. Currently based at the company’s US office in Houston, Texas, he is responsible for developing its global strategy. Drawing on a wealth of overseas experience in Germany, Singapore and the United States, he shares his frank opinions on the current landscape and what he sees as the keys to i-PRO’s success in the global market. 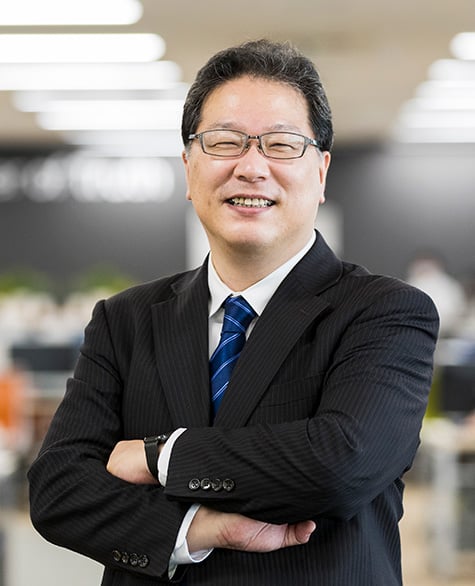 Pioneering a new horizon through evolution

With the increasing importance of sensing devices worldwide, Panasonic i-PRO Sensing Solutions set sail on a new ocean in October 2019. Representative director, president, and COO Shohei Ozaki took the helm of the company with a management sense he cultivated through diverse experience gained in various gemba (scenes). Here we talk about the "evolution" that Ozaki is aiming for as an organization, the "strategy" that it should be pursuing both in Japan and overseas, and the "future" beyond i-PRO. 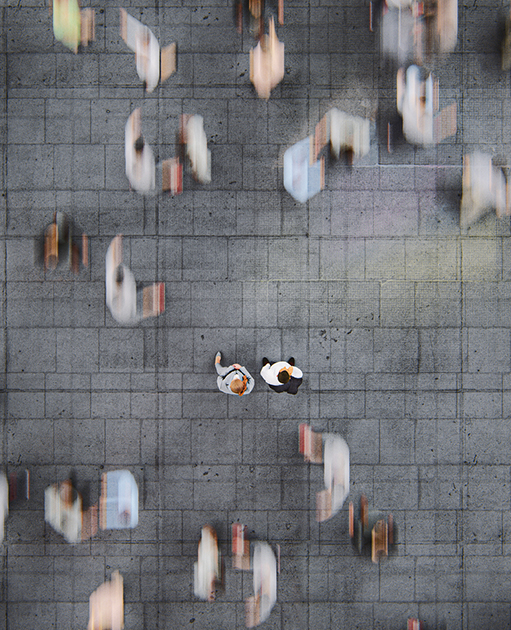 Technology Trends in 2022 Where i-PRO Looks Ahead

What is a technology trend? We think perhaps it is all about thoughts on what technologies will be realized in our future and enrich the world. We at i-PRO looked at five technology trends in 2022. 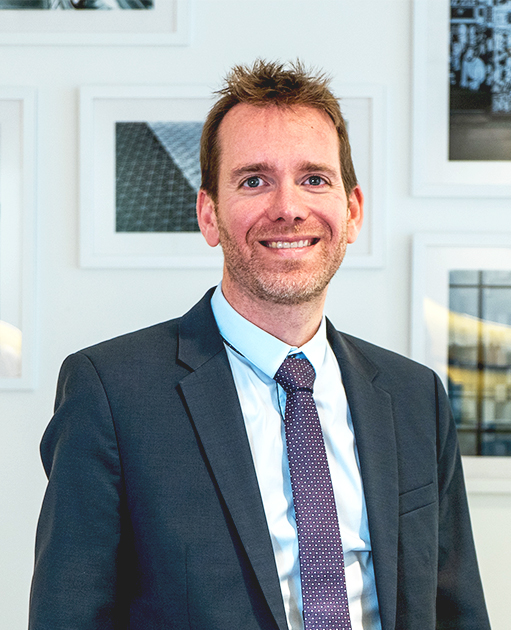 PROgress in innovation : An important year for AI and i-PRO ahead

With the explosion of AI-driven cameras expanding and changing the shape of the European security camera industry, i-PRO EMEA President Gerard Figols looks forward to a year of exciting progress in 2022. 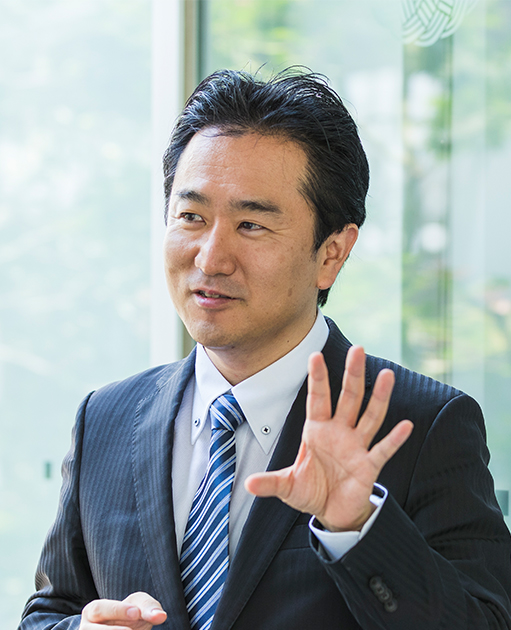 Panasonic i-PRO Sensing Solutions Co., Ltd. has long been the top manufacturer of security camera systems in Japan. The team of Japan Intelligent Surveillance Division oversees the company's business operations in the Japan market. Jun Asahina, the head of this business division, played a major role in launching i-PRO's IP network camera business. We talked with him about the current situation and future prospects for i-PRO's security camera business in Japan. 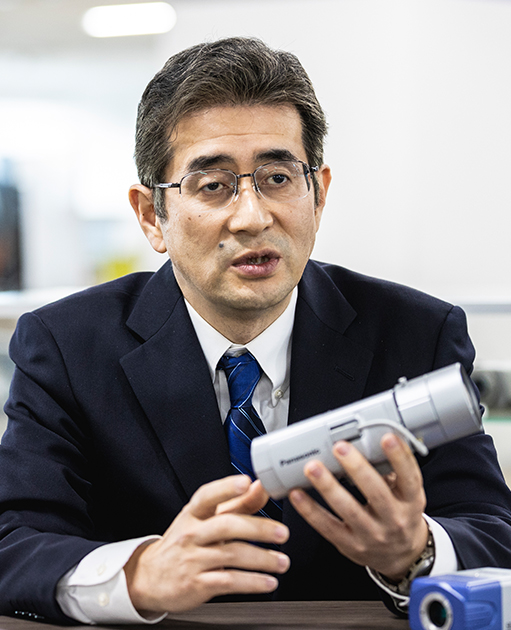 The Corporate Technology Division serves as the backbone of i-PRO’s technology in general, providing support for the creation of leading-edge technologies, planning and development by product teams working at the forefront of the industry, and bolstering the skills of engineers working on a wide range of i-PRO products, including intelligent surveillance, public safety, and industrial and medical vision modules.

Speaking from his perspective as an engineer, Makoto Takakuwa, who as head of Research & Development plays a major role in i-PRO’s ongoing emergence as a world-class company. Offering an engineer’s perspective, Mr. Takakuwa shared his views on the importance of R&D at i-PRO and its future direction.